Mt. Popa is about 50km away from Bagan and 1,500 metres high. It takes about 45 minutes drive from Nyaung Oo Airport, Bagan. It is an extinct volcano that is estimated to have erupted for the final time, over three hundred and twenty thousand years ago.
It is the legendary home of the 'nats' or spirits. The Mount Popa area has also been designated as a National Park, a perfect place for eco-tourism.
At a steady pace it shouldn’t take you more than 20 minutes to reach the summit of this impressive rocky crag crowned with a picturesque complex of monasteries, stupas,shrines and panoramic view of the temples of Bagan.
You will see monkeys along the way to top. You can visit Mt. Popa as a day-return trip from Bagan. 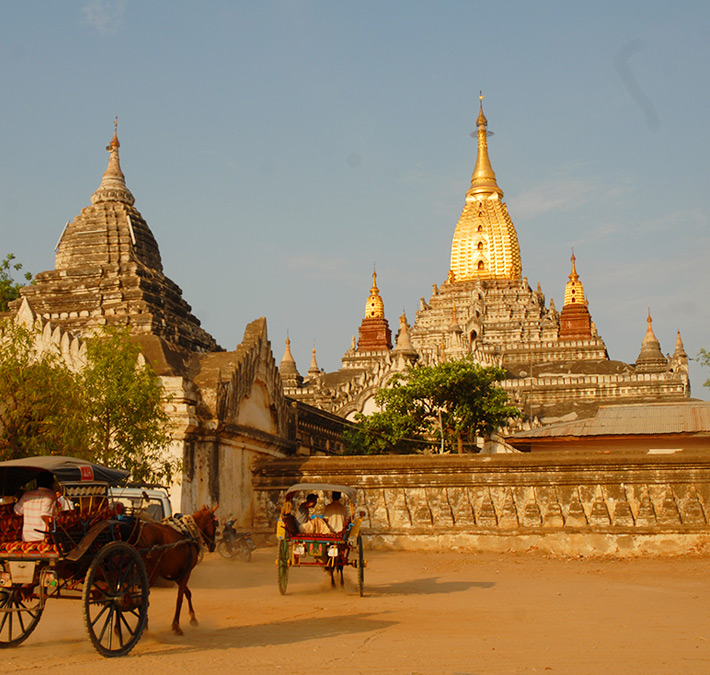 It is said that every Myanmar should visit Bagan and without visiting Ananda you cannot be said to have visited Bagan. Ananda Temple is like a museum. You can study all kinds of Myanmar arts here — architecture, stone sculpture, stucco, glazed plaques, terra cotta, wood carving, artwork of blacksmith etc. There are three different versions regarding the name of this temple. 1. When King Kyansittha asked eight Arahats (Saints) to provide him with a design for the religious monument he was about to build, they created the image of Nanda Mula Cave Hall held to be in the Himalayas. So the temple was constructed on the model of that image and it came to be known as "Nandamu" which in course of time corrupted to sound "Ananda. 2. The Sanscrit word "Anand” means "very beautiful." The name "Ananda" must have been derived from this Sanscrit word. The Temple is extremely beautiful. 3. There is a Pali word " Ananta Panna" which means " the endless wisdom of the Buddha." The temple sym¬bolizes this attribute of the Buddha. Hence it is called "Ananta Temple." It cannot be said for certain which version is correct because the original stone inscription was silent about its name. But "Ananda" is the traditional name known to the Myanmar people for generations. Ananda Temple was constructed in Koza Sakarit 452 M. E (A. D. 1091) by King Kyansittha. He was also known as Hti Hlaing Shin. His regnal title was " Sri Tribuvanaditya Dhamma Yaza" meaning "the King of Justice who shines like the sun over three auspicious worlds." 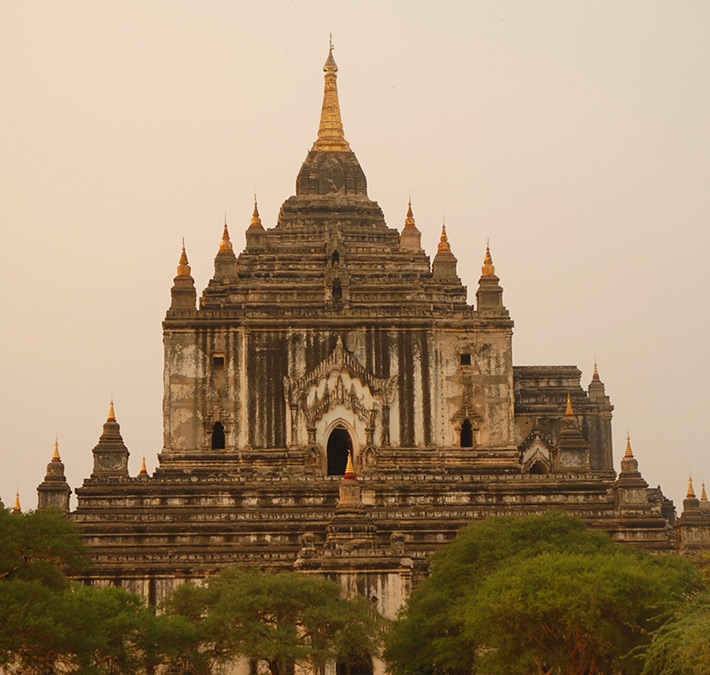 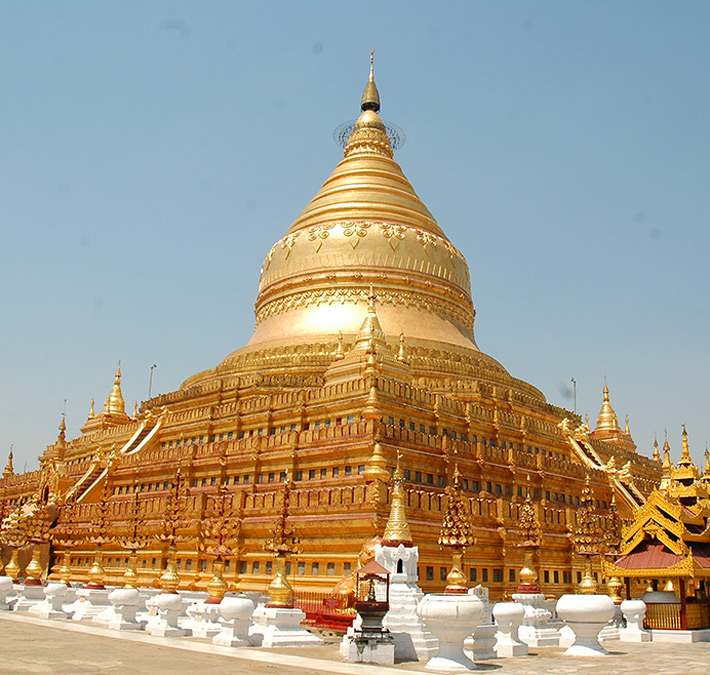 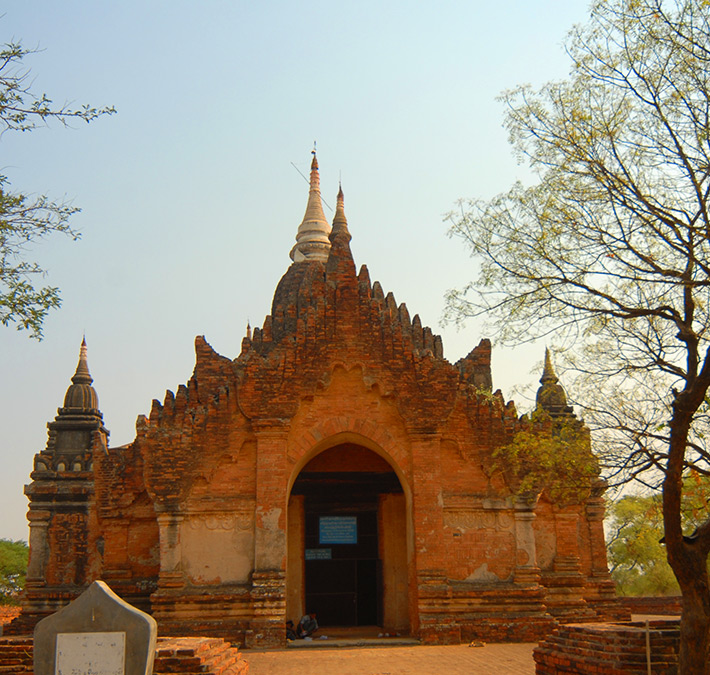 This Pagoda stands close to the western side of the Mya Zedi Pagoda near Myin Kaba village. It was built in A. D. 1113 by Prince Yaza Kumaya. Lines 30 to 32 of the Pali inscription of Mya Zedi stone pillar tell us that Yaza Kumaya was the Prince as well as Amat Kyi (High Official) and that he built a cave pagoda with a gold finial and cast a gold image of Buddha. 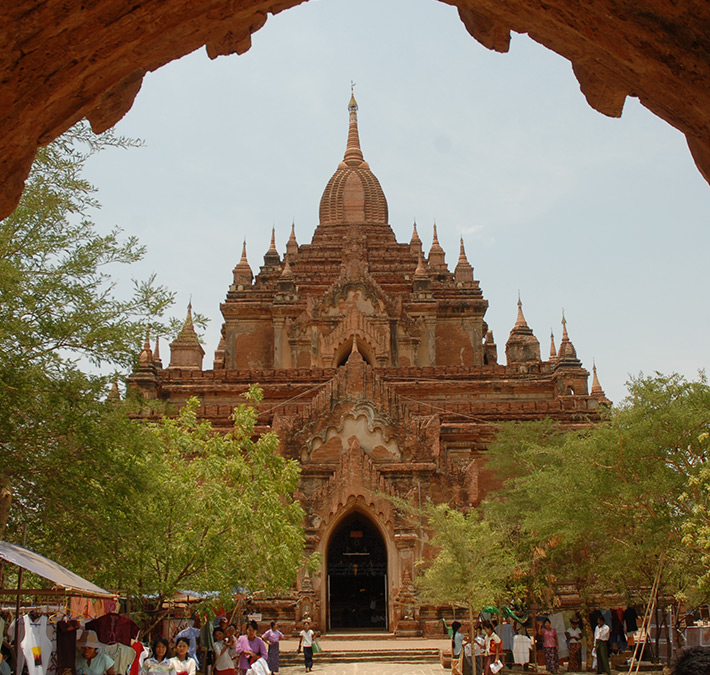 This cave Pagoda was built in A.D. 1218 by the king who bore three names, " Zeya Theinkha," "Nan Taung Mya Min" and " Htilo Minlo Min" Legend has it that King Narapati Sithu had five sons. He had to appoint one of them Crown Prince. He had in mind Zeya Theinkha to succeed him. But to be fair he let the white umbrella which was one of the royal regalia to choose the deserving son. He placed the white umbrella in the center of the sons who were ranged around it. 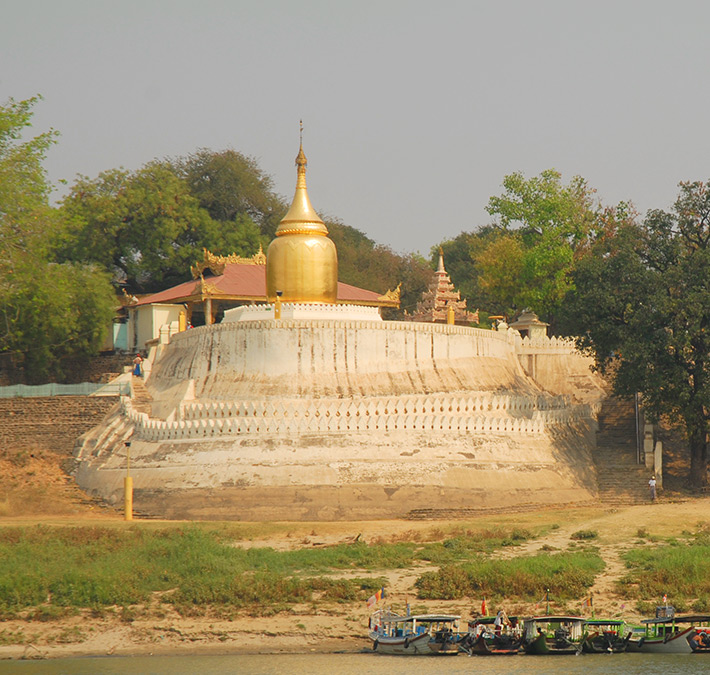 Bu Paya is located on the bank of the Ayeyawady River, in the north-west direction of the city wall of Bagan. It is traditionally opined that Bu Paya was built in A.D 3rd century by King Pyusaw Hti. The shape of the pagoda is typically Pyu. In the Pyu Period of Myanmar history, pagodas were built in cylindrical form with no decoration of art work. In Bagan, before the bell shaped pagodas came into fashion, Pyu type pagodas were quite common.